I have to admit, there is nothing original in this article, perhaps the shield that caused me some trouble. I used other people’s research, experience and articles to fabricate a solution that I found worthy of publication. This is a choke balun that is very easy to construct and has very good parameters.

First of all, I would like to acknowledge Steve Hunt, G3TXQ (SK), for his invaluable technical article about balun measurements. See it at: link.

The following table is an excerpt from this article, that undoubtedly many of us will use for building choke baluns.

This version of the table is updated on May 2015, whereas, I used an earlier version published in 2012, with slightly different specifications:

Having said that, let’s get to the construction of my choke balun. I tested the 17-turns on 1xFT240-43, but my measurements with a miniVNA PRO (http://miniradiosolutions.com/minivna-pro) did not result in an outcome that I liked. So, I produced one with the 12-turns on the same toroid core.
In addition, I decided to use an aluminum enclosure to shield the balun. I made sure that one of the coax connectors are insulated from the aluminum shield. Had I not insulated it, the coax shield would not have any effect, since it would be shorted by the conductive enclosure. However, the transmission loss measurements on the coax shield gave my rather poor results anyway.
For completeness here is the way to test the common mode choke: 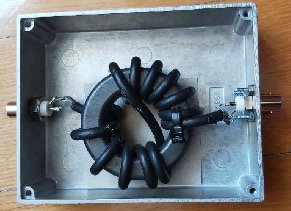 This is from link. It is worth checking out this site, it gives you a lot of measurement techniques using the miniVNA.
Let’s go back to my poor results. Knowing that my choke balun gave me excellent results earlier (I built it more than a year ago and left it in my junk box), before I decided to build it into the enclosure, I was baffled. I tried many things, including recalibrating the miniVNA, grounding the shield to the miniVNA, which gave me -60 dB TL value, but I knew it had to be wrong. Finally, I decided to remove the grounded BNC from the aluminum enclosure and replace it with an insulated BNC instead. Eureka! My measurement results became much improved.
But, before I present my measurements, here is the choke balun with the enclosure, this time with both BNCs insulated from the enclosure:

By the way, I used BNCs instead of SO-239 connectors, since I could not figure out an easy way to insulate them from the box.
My initial measurement with one of the BNCs grounded showed the TL value degrading rapidly above the 20m-band. However, both BNCs being shielded from the enclosure, it improved the choke balun immensely, see the result:

This needs an explanation. What do I mean by “/w Grounded Shield”? As I said, the two BNCs are insulated from the aluminum enclosure, however, the enclosure is now grounded to the miniVNA common ground. If it is not grounded, the measurement results are nothing far away from this measurement above, see next:

It just becomes a bit jittery on the higher end of the spectrum without the ground. Nevertheless, note that the transmission loss essentially reaches below -25dB from approximately 80m to 10m-bands on both diagrams.
For the sake of curiosity, I also measured the hot lead of the coax for transmission loss: 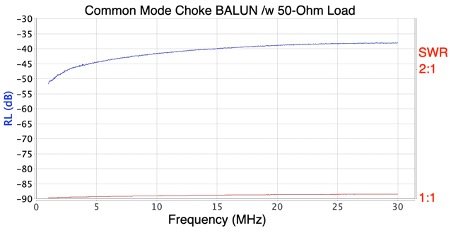 Essentially it is the same curve as the measurements on the shield of the coaxial cable, after all, it is practically the same coil. Although notice that it is providing better rejection then the measurement on the outer shield of the coax, possibly because of the coil being shielded. Nevertheless, this is not important, in proper use its purpose is not to reject anything.
Finally, how does the choke balun perform for throughput: 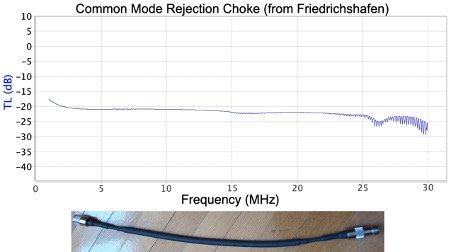 This diagram shows that the return loss of the balun is better than about -40dB across the given spectrum. This translates to an almost 1:1 SWR across this entire spectrum.
And now, let’s compare it with the “commercially” built choke balun I happened to purchase at the HAM Radio Conference at Friedrichshafen: 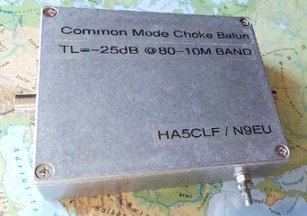 It is evident, that my home-brew choke balun is as good as the professionally built balun, or even slightly better.
Some closing thoughts come to my mind. Why did I get detrimental results with one of the BNCs connected to the aluminum enclosure? I can only speculate, but my opinion is, that the enclosed shield of the coaxial cable being close to the conducting surface of the enclosure itself, provided stray capacitance to the shield of the coax. This stray capacitance across the coax shield reduced the chocking effects of the inductance of the shield. To check my rational, I tested it with a capacitance added to the insolated BNC ground and the other end of the cap connected to the enclosure. This is not the BNC being fed, but the other end of the choke. It reduced the TL of the higher end of the spectrum.