I planned to spend a week in the sunny Lanzarote island (EA8), part of the Canary Islands, west of Morocco, Africa during the harsh winter at home. However, while enjoying the beach, I also looked-for getting some amateur radio action. Early failures to get on the air from a hotel, motivated me to take stock this time well in advance.

I need to make sure licensing to operate ham-radio in a foreign land is permitted, proper stealth antenna is available, and proper ham-radio equipment is at hand. I considered today’s restrictive baggage sizes and weight limits for air travel, while selecting the equipment.

First let’s deal with licensing. There is no reason to pounder further, if licensing is prohibitively complicated or too restrictive. Since, Lanzarote is under Spanish government, the same licensing reciprocity applies as mainland Spain, so licensure is quite straightforward. See ARRL’s website for additional information operating [0] in foreign lands.

Next, we have to make sure; we have the right equipment, including an appropriate and reasonably stealth portable antenna. I chose a KX3 for transceiver and MFJ-1317 for power supply. One will need, of course, the right power converter when abroad. Lanzarotte uses 230V 50Hz. MFJ-1317 handles this voltage, the only thing we will need is the physical plug conversion to fit the European receptacle.

I experimented quite a bit with various antennas for field days and in general for portable operation. As an avid Summit on the Air (SOTA) [1] operator, I love hiking and activating mountains, while testing various portable antennas. I settled for the End-Fed Half Wave [EFHW] antenna [2]. The antenna is easy to install. All I have to do is to throw one end up to the tree branches and walk as far as I need with the other end, and connect it to a tuner. It works like a charm, being high on top of a hill, most of the time ending up initiating a pile-up of SOTA chasers.

Installing an antenna in a hotel is quite a different experience. I found out the hard way, that an EFHW antenna is hardly ever suitable in a hotel environment. It requires a fixed distance between one end and the other end of the antenna, even with rope extension. In one instance, there was not a single tree nearby the hotel to hang the antenna. After two similar failures to operate from a hotel room, I decided to search for a better solution. After all, I cannot allow failure in Lanzarote.

After a careful search, I found the Rybakov Antenna [3] that appealed to me. It seemed very simple, a 24 ft. and 11 inches long (7.6 m) vertical radiator with a few radials, an easy antenna to build, while it may be relatively invisible to the eyes of the hotel staff. I bought a 35 ft. telescopic pole that I can fix to the railing of a balcony with bungee cords; throw the radials on the floor of the room and Eureka.

What is a Rybakov Antenna? Even after an expanded search on the Internet, I could not find credible origin of this antenna; however, incidentally I picked up a book about Stealth Antennas [4] authored by Steve Nichols describing exactly this antenna. The author says, Rybakov in Russian means “family of fisherman”, and it is so called because it uses a fishing pole-like rod to hold the vertical wire.

According to what I discovered, the Rybakov antenna is essentially a vertical antenna, that is not ¼λwavelength, but designed to be non-resonant on all of the HF bands, hence its magic height. It requires a 1 to 4 unun [5] and an antenna tuner to tune up. 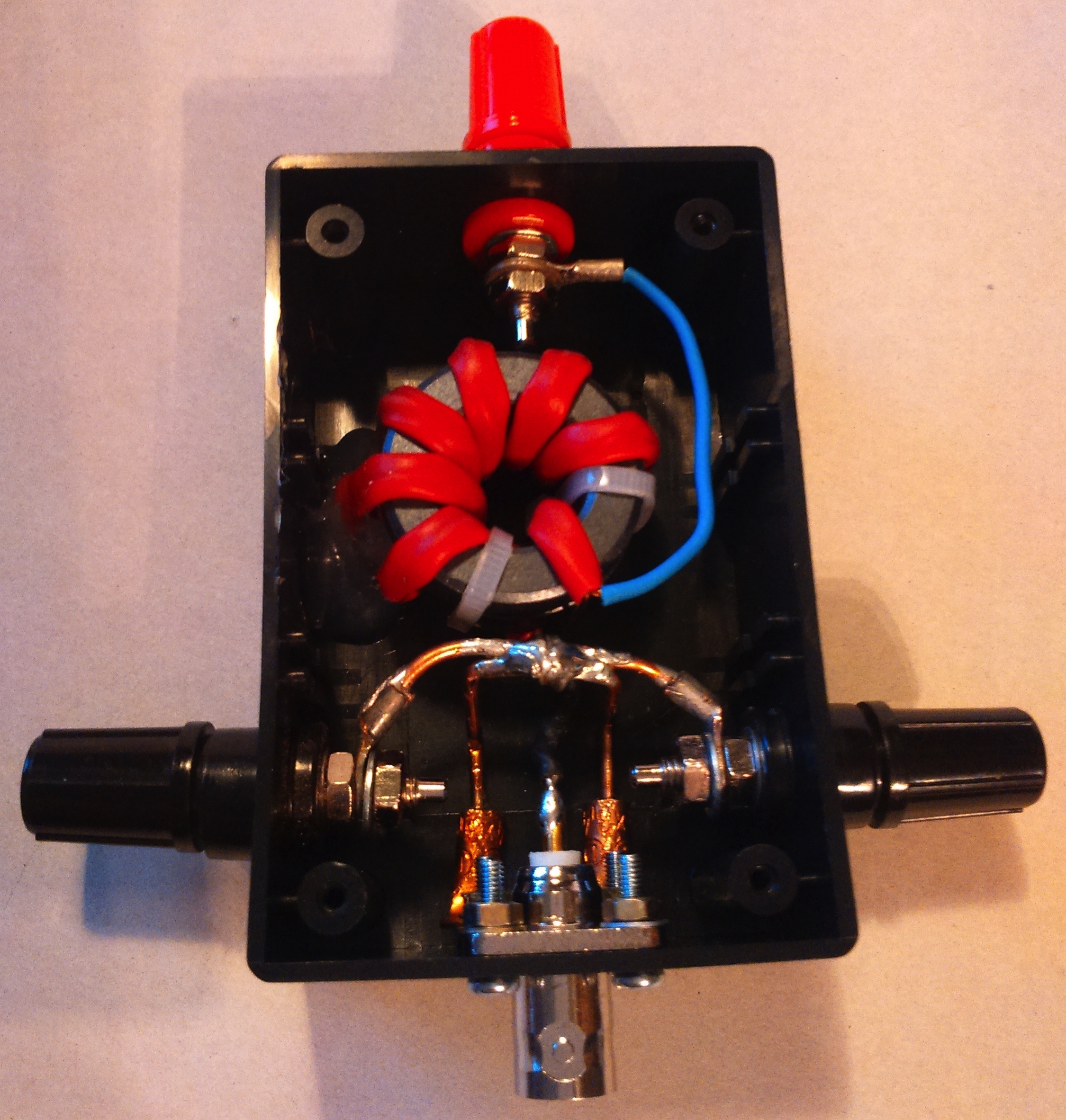 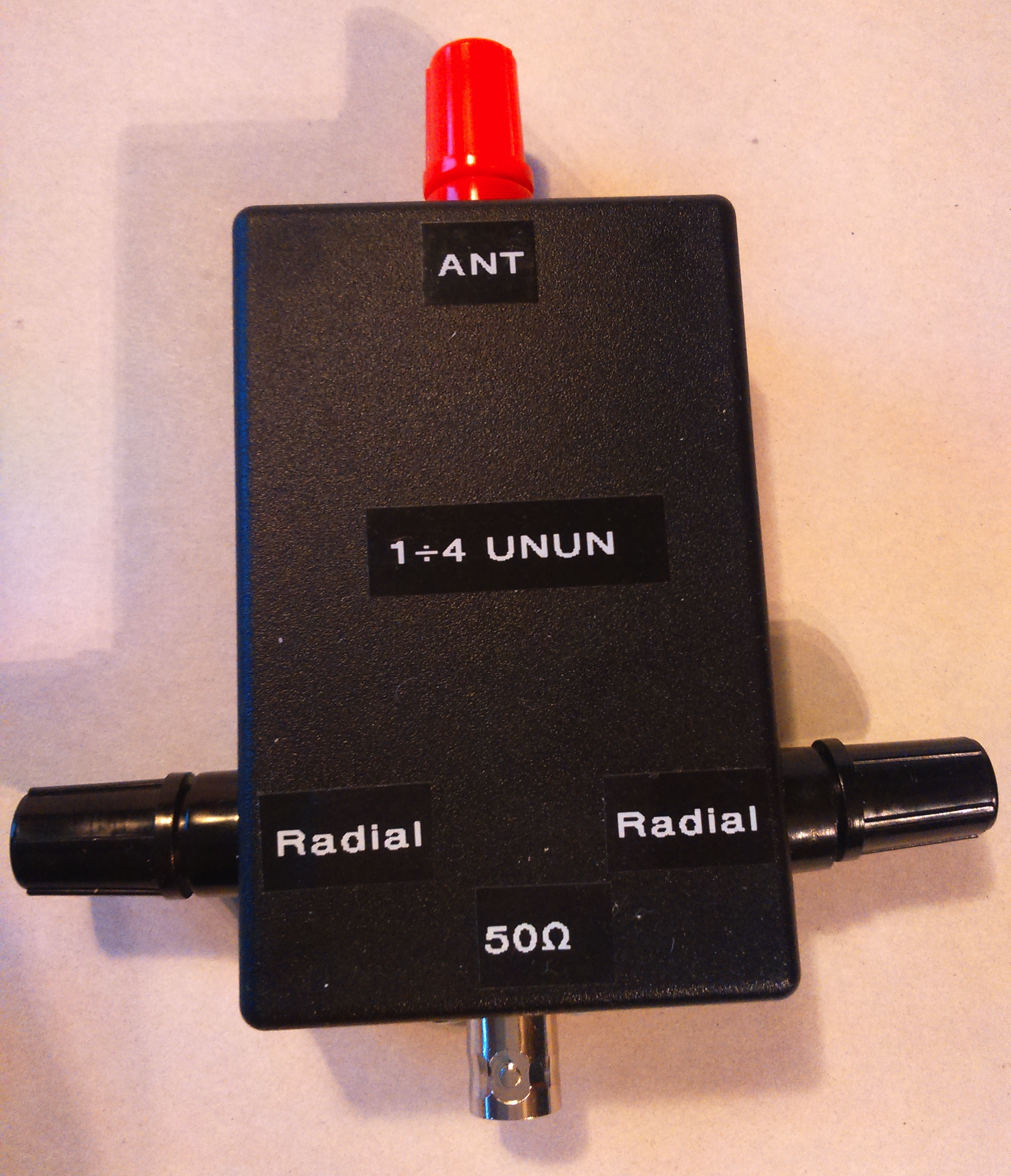 I constructed the 1:4 UNUN first. Even if the antenna does not prove to be a success, the UNUN will be useful for other projects. I measured a few ferrite toroids laying around in my drawers. I do not use iron powder toroids anymore, since I read one of Sevick’s books [6]. He said, the coating reduces their effective permeability making them inappropriate for broadband transformers. He also stated that their low AL value requires too many turns, leading to copper losses.

How to measure the AL value (inductance factor), and the initial µ0 (initial permeability), is a subject of another article, so I am not going to get into details here. I located a ferrite toroid with 1.1-inch (2.9 cm) outer diameter, more than enough for the relative low power operation with a KX3. I determined that its parameters are around AL = 450 and µ0 = 550. It is somewhere between ferrite material 61 and 43. I wound seven bifilar turns of enameled wire, protected by an insulating tube on the toroid, and then measured its SWR. As the diagram shows, it is quite low across the entire HF frequency spectrum. For my intended band usage: 40m, 30m and 20m, the SWR is under 1 to 1:04. I could not expect any better than this.

I installed banana plug receptacles on the plastic box, so it is very easy to connect the antenna wire to the red and radials plugged into the black banana receptacles. I cut two about 24 ft (~8 m) radial wires. They were not cut to resonance, since they will lie on the floor, whichever way they fit in the hotel room.

I ordered a 33ft (10 m) telescopic mast from SotaBeams [7]. The collapsed mast is 26.5 inches (67 cm), easily fitting into a sizable travel bag. It weights only 2.9 lbs (1.3 kg), perfect for travel. You may use any suitable masts, of course; however, it is important that the mast does not contain carbon, which is electrically conducive material. A cheep fiberglass-fishing pole will do just fine.

I choose the coax feed to be RG-174. Although it presents a relatively high loss, it is negligible on HF with its short, about 20 ft (~6 m) length in my case. It has low weight and it is easy to handle. Both ends have a BNC connector and a few turns on a toroid at one of its ends to reduce common mode currents. I measured the frequency response of its shield between the two ends, and from 1MHz to about 20MHz it shown over 1,500 Ohms, which is reasonably good for common mode rejection for my target bands.

I was very anxious to see how this Rybakov antenna tunes up on various bands. It was a cold winter day, two days after the Christmas holiday, when I erected the antenna in a nearby forest preserve with its two radials spread around on the ground. The KX3 auto-tuner tuned up 80m all the way to 6m bands, including all WARC bands with ease. I did not try 160m, and think that even 80m is probably not a very usable band with such a short whip.

Nevertheless, we know, a dummy load tunes up just fine, so the real test is generating QSOs. I produced some QSOs on 40m CW with 10W, receiving reasonable reports from as far as 950 mi (1508.2 km) away. I deduced, if it worked on the lowest band of my target bands, it is only the propagation conditions that will affect the higher bands. I decided to take the chance and take it to Lanzarote for my trip.

The second day after settling in the hotel, I surveyed the balcony and the surroundings for the placement of the antenna. To the left of the balcony was a video surveillance camera, so I decided to install the pole in the evening, perhaps the camera’s vision is reduced, as well as nobody will be outside the hotel grounds to see it. The right side of the balcony had a grove on top of the building side, where I could slide the antenna pole to be out of the sight of the camera. The following pictures demonstrate the placement of the antenna; however, I could not take pictures during the evening, therefore it is only illustrated with a red line. 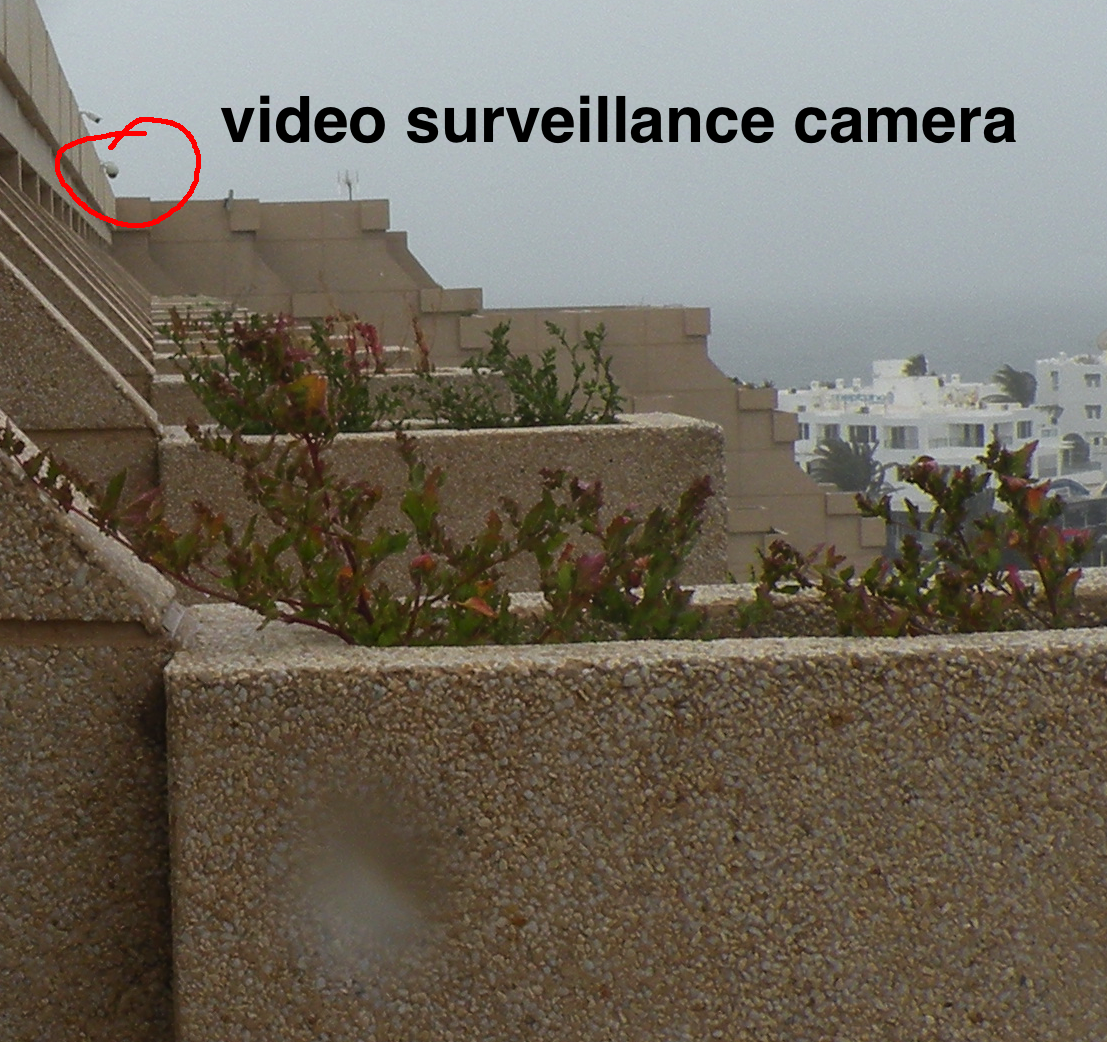 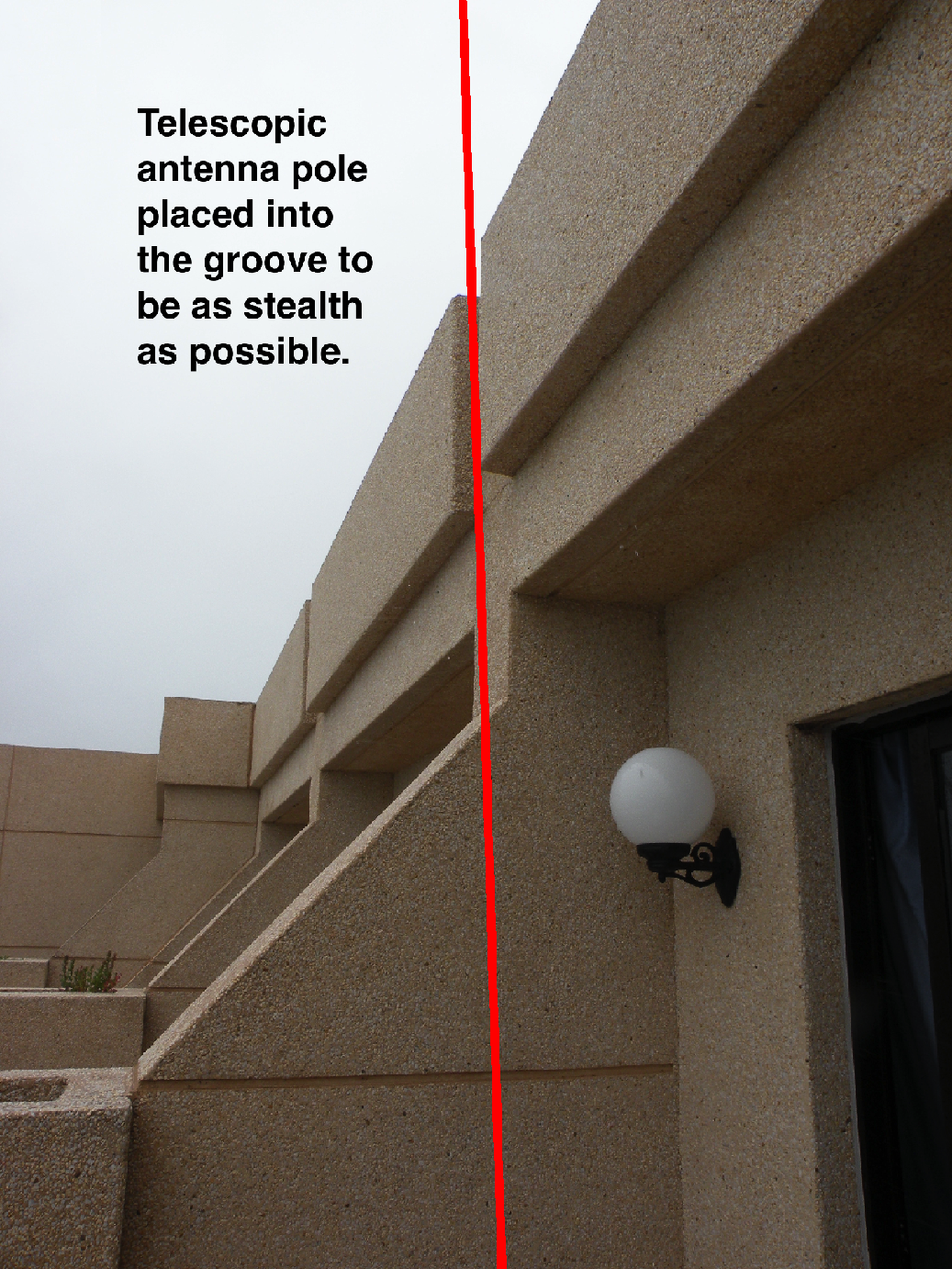 Soon I set up the rig, tuned the antenna for 40m, and searched for activity. I could hear one or two fragments of calls, but the band was essentially dead. I started calling CQ EA8/HA5CLF. After long repeated calls, VK3HJ called back. I received a 569 report. Then after a few unsuccessful exchanges, such as HA5TB and YT1N (they faded away and the QSO was incomplete), IU5ASA returned my call and I received a 589 report. Another NIL for IK6RFQ, but then UX5UW gave me a 589 report. I thought it was quite good for a start.

The next day I produced UY5VA and HA8SSG both with 599 reports. However, besides these two QSOs, I was not able to hear anybody else even though I diligently kept calling a CQ.

The first two days I started operating during the evening around 9PM UTC. The third day, I tried it much later, around midnight, expecting to get some North American activity. The band was completely quiet. I produced no QSOs.

Later I examined the Reverse Beacon Network (RBN) reports to see who heard me. This table is sorted according to the signal strength. There were quite a few RBNs, that heard me with a reasonable signal strength.

So, was this mini expedition a failure or was it a success producing six QSOs from the Canary Islands? I certainly enjoyed it, and being a constructer as well as an operator, I appreciated the learning from selecting the antenna, building it, testing and measuring its parameters, and finally operating at the intended location. Even the logistics of organizing, what to take, how to pack, and where and how to erect the antenna was an enjoyable challenge.

To be honest, I was expecting a small pileup as I often experience it with SOTA activation; however, I came home with new learning and a bit of suntan.

Istvan (Steve) Agg, N9EU / HA5CLF was first licensed in 1973 as OL8CCW. During college years, he became KA9OLQ, then KD9WY settling in Chicago, where he graduated in electrical engineering, but most of his early career worked as a software engineer. He never gave up home brewing electrical circuits or building gadgets. On the next move, he became HA5CLF in Budapest, and M0KVL while working in London. He is an active member of the HA5KDR amateur radio club, local ARES, and enjoys SOTA and portable operations. Currently, he is a resource and project manager at a Swiss IT firm, supporting the pharmaceutical industry. Istvan is a member of the ARRL, and may be contacted at n9eu@arl.net.